I arise today
Through a mighty strength, the invocation of the Trinity,
Through the belief in the threeness,
Through confession of the oneness
Of the Creator of Creation.

I arise today
Through the strength of the love of Cherubim,
In obedience of angels,
In the service of archangels,
In hope of resurrection to meet with reward,
In prayers of patriarchs,
In predictions of prophets,
In preaching of apostles,
In faith of confessors,
In innocence of holy virgins,
In deeds of righteous men.

I arise today
Through the strength of heaven:
Light of sun,
Radiance of moon,
Splendour of fire,
Speed of lightning,
Swiftness of wind,
Depth of sea,
Stability of earth,
Firmness of rock.

I summon today all these powers between me and those evils,
Against every cruel merciless power that may oppose my body and soul,
Against incantations of false prophets,
Against black laws of pagandom
Against false laws of heretics,
Against craft of idolatry,
Against spells of witches and smiths and wizards,
Against every knowledge that corrupts man's body and soul.
Christ to shield me today
Against poison, against burning,
Against drowning, against wounding,
So that there may come to me abundance of reward.

Through a mighty strength, the invocation of the Trinity,
Through belief in the threeness,
Through confession of the oneness,
Of the Creator of Creation.

The words of this ancient celtic prayer are commonly known by several titles: it's first line ("I Arise Today"), "Christ with me" (the refrain element, which has inspired a number of congregational worship songs, and recalls the writing of the Apostle Paul in his letter to the Ephesians ) and "The Deer's Cry". It is also known by the title "St. Patrick's Breastplate", as the words are often attributed to St Patrick, the 5th century Irish missionary. He is widely celebrated as being the one who brought the good news of Christ to what was, at the time, a largely pagan island. By the time of his death he is said to have established over 2000 churches in Ireland.

However, there is some doubt as to whether St Patrick actually wrote these words. "A Golden Treasury of Irish Poetry, AD 600-1200" (by Greene, David; Frank O'Connor) cites the prayer as probably dating from the eighth century.
The prayer is written in the style of a druid chant. Legend has it that St Patrick recited these words before encountering a number of druids who had been plotting against him. When the pagans were due to face St Patrick down and ambush him, all they saw was a gentle doe, followed by twenty fawns. God had disguised St Patrick and his followers, and honoured his prayer. Hence St Patrick's prayer is sometimes referred to as " The Deer's Cry".

"May The Road Rise Up To Meet You" - an uplifting version of this traditional Irish blessing:- 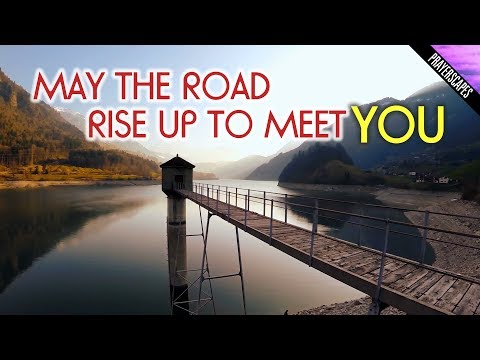 May there always be work for your hands to do

May there always be work for your hands to do.
May your purse always hold a coin or two.
May the sun always shine upon your window pane.
May a rainbow be certain to follow each rain.
May the hand of a friend always be near to you and
May God fill your heart with gladness to cheer you.


follow this link for more Celtic prayers, including the famous "May There always be work for your Hands to do".