Apostolic prayers in the bible

This page is about the inspiring apostolic prayers and prayer life of Jesus, Paul, Peter and John.

Christ is our greatest role model for how to live a life of prayer - often withdrawing in private to converse with his Father, being open in his dependency of the Father in his public ministry (for example, his giving thanks to God over the five loaves and two fishes) and frequently praying as death drew near. He also taught his disciples how to pray with the great model prayer that we know today as the Lord's Prayer. The letters of Paul give us a glimpse into Paul's prayer life - he is often in intercession for the churches that he is in contact with and his prayer life is an inspiring model for how we can pray for one another. Further down this page are some wonderful examples of Paul's prayers as well as early recorded prayers by the Apostles Peter and John.

Sermon on the Mount

In the Sermon on the Mount, Jesus talks about how we should pray. Here are some of the characteristics:-

• It's not for show - it's not about demonstrating how much we know about God. Rather, it is the simple heartfelt cries to God in secret that the Father rewards:-

"When you pray, you shall not be as the hypocrites, for they love to stand and pray in the synagogues and in the corners of the streets, that they may be seen by men. Most certainly, I tell you, they have received their reward. But you, when you pray, enter into your inner room, and having shut your door, pray to your Father who is in secret, and your Father who sees in secret will reward you openly".

• Just saying lots of words and repeating them is not much use either! (Matthew 6:6)
• When we speak to God, Jesus teaches that we are to address Him as "Father" and then goes on to give a model for praying that has become known as "The Lord's Prayer". (Matthew 6:7-13)

Strength in the face of temptation

• After fasting for forty days in the wilderness, Jesus is tempted by Satan.
Notice that he does not enter into a conversation with him. At each test, Christ replies with scripture, and then finally commands Satan to leave.
• In the Lord's Prayer, Jesus prays "Bring us not into temptation, but deliver us from the evil one" (Matthew 6:13, WEB)
• Christ repeats this exhortation to pray when faced with temptation in the Garden of Gethsemane:-

"And he comes to the disciples, and sees that they are sleeping, and says to Peter, 'What, were you not able to keep watch with me one hour? Keep watch with prayer, so that you may not be put to the test: the spirit truly is ready, but the flesh is feeble'."

Christ's prayer for the believers


"Not for these only do I pray, but for those also who believe in me through their word, 21 that they may all be one; even as you, Father, are in me, and I in you, that they also may be one in us; that the world may believe that you sent me".

Prayer for laborers in the harvest

Christ exhorts us to ask the Father for anointed laborers to be sent out into the harvest fields:-


"Then he said to his disciples, There is much grain but not enough men to get it in. Make prayer, then, to the Lord of the grain-fields, that he may send out workers to get in his grain".

In Acts 3, it is recorded that the Apostles Peter and John prayed for a crippled man and he was remarkably healed - an event that did not go unnoticed to the Sanhedran as this cripple frequently sat and begged for money outside the Temple. The apostles are then brought before the Sanhedran and ordered into custody. When they were released, they reported back to the believers in Jerusalem. The following is a section of their prayer and response to the Lord in the light of everything that had happened to them:-

"Now, Lord, look at their threats, and grant to your servants to speak your word with all boldness, while you stretch out your hand to heal; and that signs and wonders may be done through the name of your holy Servant Jesus."

Rather than backing down and keeping quiet in face of the threats from the Sanhedran, their prayer and desire was the opposite - to speak with boldness, and to ask for many more miracles and healings. 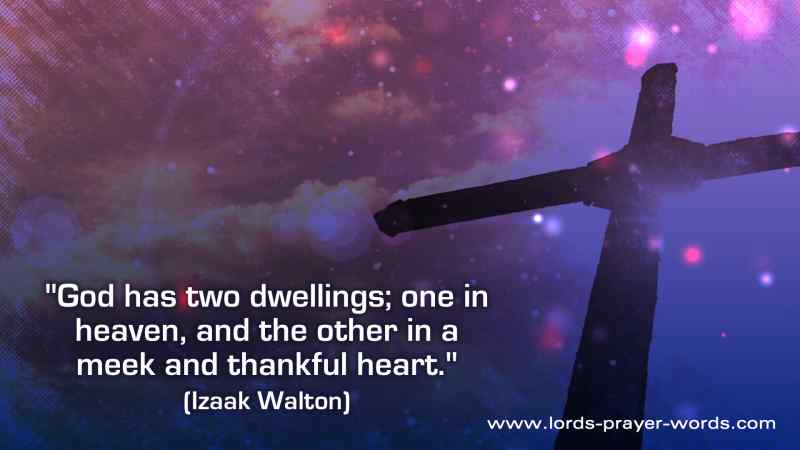 Paul's prayers for the believers in Ephesus

Paul prayers that they may know more about Christ, the power that is available to them, and their destiny in God:-

" ...the God of our Lord Jesus Christ, the Father of glory, may give to you a spirit of wisdom and revelation in the knowledge of him;
having the eyes of your hearts enlightened, that you may know what is the hope of his calling, and what are the riches of the glory of his inheritance in the saints,
and what is the exceeding greatness of his power toward us who believe, according to that working of the strength of his might which he worked in Christ..."

And later in the letter, Paul prays again for them, this time asking that Christ would be at the centre of their lives, and they would know the full extent of Christ's love for them:-


"For this cause I go down on my knees before the Father,
From whom every family in heaven and on earth is named,
That in the wealth of his glory he would make you strong with power through his Spirit in your hearts; So that Christ may have his place in your hearts through faith; and that you, being rooted and based in love, May have strength to see with all the saints how wide and long and high and deep it is, And to have knowledge of the love of Christ which is outside all knowledge, so that you may be made complete as God himself is complete."

Paul's prayers for the believers in Rome
Paul prays that they would be united with each other and in their worship of the Father:-


"Now the God of patience and of encouragement grant you to be of the same mind one with another according to Christ Jesus, that with one accord you may with one mouth glorify the God and Father of our Lord Jesus Christ."

The wise man in the storm prays God not for safety from danger but for deliverance from fear.