Introduction to the Lords Prayer
Our Father Who Art In Heaven

Hallowed be Thy Name
Thy Kingdom Come
Thy will be done
Give us this day our daily bread
Forgive us our trespasses
As we forgive them that trespass against us.

Lead us not into temptation
Deliver us from evil

For thine is the kingdom
The power and the glory
For ever and ever. Amen.

"Lead Us Not Into Temptation"
Commentary on the Lord's Prayer

Father Maximos, a Mount Athos monk, observes that the holy elders teach there are five stages in assaultive thoughts such as temptation. Logismos (these are thoughts and images that attack our thinking & lead us away from Christ) first assault our minds. For example, we may see something in a shop & be tempted to steal it. At this point no sin is committed (ideas and thoughts of sin happen to all people – even the holiest ones!) The next stage is interaction – we may then enter into a dialogue with this thought (for example, we may consider the risks involved). Again, no sin has been committed. The third stage is consent. A decision is made in the mind to give in to this assault. This is beginning of sin and leads us to acting it out. The next stage is captivity. When the temptation besets us again, we have much less resistance to these attacks and become addicted or controlled by them. The holy elders observer there is a fifth and final stage – passion. Here addictions (such as alcoholism or drug addiction) become obsessive and lead to self-destruction and harming others.
(Father Maximos teachings on this are outlined in greater detail in the book by Kyriacos Markides entitled “The Mountain of Silence”).

We can see from the above that the first and second stages – that of assault and interaction - is where we shall need to aware of Jesus’s words “lead us not into temptation”. This is where the battle ground is. If a thought is going to lead us down the path of destruction, we must ask God to “deliver us from evil” and give us the strength we need to resist this attack on our minds.

on "Lead Us Not Into Temptation"

Verse 13. And lead us not into temptation] That is, bring us not in to sore trial. PEIRASMON, which may be here rendered sore trial, comes from PEIRW, to pierce through, as with a spear, or spit, used so by some of the best Greek writers. Several of the primitive fathers understood it something in this way; and have therefore added quam ferre non possimus, "which we cannot bear." The word not only implies violent assaults from Satan, but also sorely afflictive circumstances, none of which we have, as yet, grace or fortitude sufficient to bear. Bring us not in, or lead us not in. This is a mere Hebraism: God is said to do a thing which he only permits or suffers to be done.


The process of temptation is often as follows: 1st. A simple evil thought. 2ndly. A strong imagination, or impression made on the imagination, by the thing to which we are tempted. 3dly. Delight in viewing it. 4thly. Consent of the will to perform it. Thus lust is conceived, sin is finished, and death brought forth. Jas 1:15. See also on Mt 4:1. A man may be tempted without entering into the temptation: entering into it implies giving way, closing in with, and embracing it. 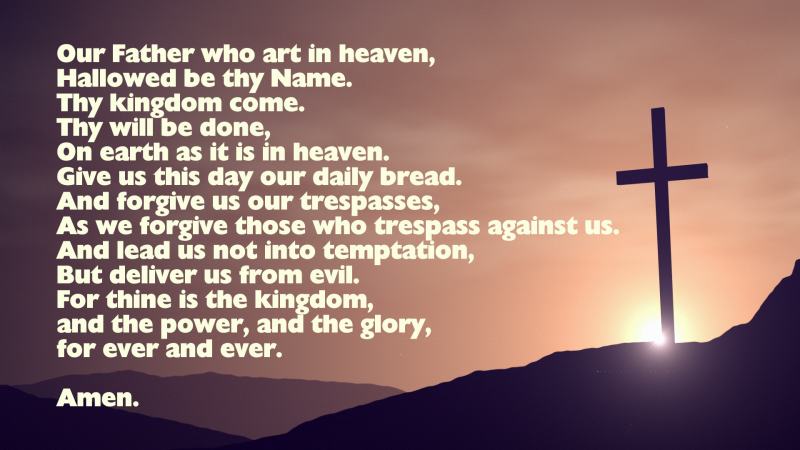 Matthew Henry on "Lead Us Not Into Temptation"

6. And lead us not into temptation, but deliver us from evil. This petition is expressed,
(1.) Negatively: Lead us not into temptation. Having prayed that the guilt of sin may be removed, we pray, as it is fit, that we may never return again to folly, that we may not be tempted to it. It is not as if God tempted any to sin; but, "Lord, do not let Satan loose upon us; chain up that roaring lion, for he is subtle and spiteful; Lord, do not leave us to ourselves (Ps 19:13), for we are very weak; Lord, do not lay stumbling-blocks and snares before us, nor put us into circumstances that may be an occasion of falling." Temptations are to be prayed against, both because of the discomfort and trouble of them, and because of the danger we are in of being overcome by them, and the guilt and grief that then follow.

A creative reading of the Lord's Prayer in many languages, filmed in New York shortly after the 9/11 tragedy:-

Albert Barnes
on "Lead Us Not Into Temptation"

Verse 13. And lead us not into temptation. A petition similar to this is offered by David, Ps 141:4 "Incline not my heart to any evil thing, to practise wicked works with men that work iniquity." God tempts no man See Jas 1:13. This phrase, then, must be used in the sense of permitting. Do not suffer us, or permit us, to be tempted to sin. In this it is implied that God has such control over us and the tempter, as to save us from it if we call upon him. The word temptation, however, (Mt 4:1) means sometimes trial, affliction, anything that tests our virtue. If this be the meaning here, as it may be, then the import of the prayer is, "Do not afflict or try us."

Next: "Deliver us from evil"

about the commentary writers

• Matthew Henry (1662-1714) was a non-conformist English clerygman. His commentaries on the scriptures are intended as a devotional guide to the Bible, rather than as a critical study.

• Albert Barnes (1798-1870) was a Presbyterian minister and American theologian. His 'New Testament Notes' are invaluable in helping to understand difficult passages of scripture. Barnes frequently references the original Greek to reveal the meaning of the text.

• Adam Clarke (1769 or 62 to 1832) was a Methodist minister and biblical theologian. His extensive commentary on the New Testament, at around 6000 pages long, is one of the longest works on the bible ever written by one person.

Click here for more commentary on the Lord's Prayer