Information about this site

www.lords-prayer-words.com began in 2007 as a small research project to bring together and organise different versions of the Lord’s Prayer. This included traditional and modern versions of the prayer, as well as the 'Our Father' in a number of common languages. Soon after the launch of the site, a commentary section on the prayer was developed to include the work of classic biblical scholars such as John Calvin and Alexander Maclaren.
The website has grown and developed over the years to become a wider resource for Christian prayer, and now includes sections on other famous prayers of the anglo-saxon and celtic traditions, a section on how to pray to God (with various prayer petition topics), and an expanded line-by-line commentary on the Lord’s prayer with links to multi-media resources for this famous prayer.

In 2012, a section for prayers through the year was launched, with resources for specific times and events such as Christmas, Easter and Thanksgiving. In the following year, a prayers for children section was developed, with extensive resources for parents and teachers to help with prayer in the home and the classroom. At the beginning of 2014, another new section was developed with various pages about healing, such as prayers for sick children and prayers to help with fears and addictions. Most recently In the summer of 2015, the site was completely redeveloped to become a fully "responsive" website (for mobile and tablet use) and restructed to create new categories in prayer.

There are currently twelve main sections to this site, arranged as follows:-
(click on the title to jump into this section)

1. The Lord’s Prayer in various versions and languages
The "Our Father" in different versions (such as traditional and modern) and translations (e.g. Spanish, Latin, French etc.)

2. A commentary section on the Lord’s Prayer
Exploring the meaning of this prayer through the work of famous biblical scholars such as John Calvin and Charles Spurgeon.

3. A line-by-line commentary on the Lord's Prayer
An extensive analysis of this famous prayer by the writings of Matthew Henry, Adam Clarke, Albert Barnes and others.

4. Famous Prayers
Including established prayers from the Anglo-Catholic and Celtic traditions, such as the prayer of St Francis.

5. Prayers for Healing
A series of prayers to help pray for those who are ill or suffering, with petitions for those currently being treated for cancer and those undergoing operations.

7. Work & Family
With prayers to say before work begins, for job interviews and running a business. Also in this section are prayers focusing around family life e.g. marriage prayers and petitions for pregnancy and child birth.

8. Prayer Times
A selection of pages for when praying at different times of the day and prayers for during the church year, for instance, Christmas and Easter times.

9. Events
This section is broken down into two groups - prayers for church events (such as opening or closing a meeting) and prayers for life events (e.g. birthdays, retirement, exams etc.)

10. Aids
A set of resources to help with prayer, with a short guide on how to pray to God and page for posting your own prayer requests.

11. Petitions
An extensive set of resources covering a wide range of petitions from prayers for courage and strength to requests for hope and victory. Also a smaller section on outward focused prayer (e.g. prayers of intercession, prayers for the poor and needy.)

12. Blessings
A section focused on prayers for happiness and giving, with offertory prayers and prayers that inspire and call people to worship God.

In addition to the above, the site also has a admin area with information about how to contact www.lords-prayer-words.com, and the policies of the website. Also here is a selection of links to useful websites on prayer, Christianity and other related resources. 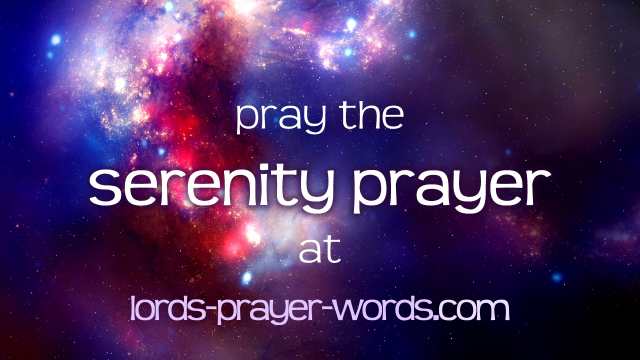 God has two dwellings; one in heaven, and the other in a meek and thankful heart.